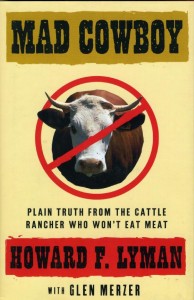 by Howard F. Lyman is his story of transformation from dairy farmer and cattle rancher to going vegan. Mr. Lyman was a fourth generation dairy farmer and cattle rancher in Montana and is now the President of Voice for a Viable Future. Mr. Lyman’s organic dairy farm outside Great Falls, Montana was started by his grandfather and passed down through the generations to him and his brother. He grew up on the farm and by the time he was eleven he had learned how to milk the cows, brand and castrate the calves. At Montana State in the College of Agriculture he learned about using pesticides, herbicides, hormones, and antibiotics for farming. After a stint in the Army Mr. Lyman came home to help his father with the farm.

When he got there, he told his father that he would run the farm using the Green Revolution techniques that he had learned at college. He stopped rotating crops and leaving acreage fallow. Instead he did chemical analysis to determine how much and what kind of fertilizer he needed. He handled weeds by using Agent Orange. As his crop yield grew, it allowed him to buy more cattle at auction. He put one hundred to two hundred cattle in a pen with a trough for food. The cattle were fed grains and protein concentrates to make them fatter. In addition, he used hormones in the feed, injected into the animal, or implanted time-release capsules underneath their hides to stimulate growth. This allowed the cattle to go to market in fifteen months instead of thirty.

Unfortunately this caused vaginal and rectal prolapses, where organs fell out of the cattle’s bodies. Instead of calling the vet, he would stuff the organs back into the cattle and sew up the wound. Disease became a problem after buying cattle from auctions, so it was easier to feed all of the cattle antibiotic-enhanced feed rather than trying to figure out, which ones were sick. He then had to change antibiotics every month to keep up with the mutating diseases. Another problem with running a feedlot operation is flies. To cut down on the fly problem Mr. Lyman would spray insecticide over the cattle, food, and water. This was done without gloves, goggles, or protective clothing.

In 1979, a tumor was found on his spinal cord. After a successful surgery, he started to get politically active and ran for congress in 1982. Unfortunately, the bank closed on his farm giving doubt to the voters if he could represent them. He lost the race fifty-two to forty-eight percent and had to sell his farm. In 1982, Mr. Lyman became a lobbyist for the National Farmers Union to maintain or increase farm subsidies. He worked on the National Organic Production Act of 1990 that would create a uniform, enforceable system of standards for organic labeling.

Mr. Lyman was three hundred and fifty pounds, his cholesterol was over 300 with high blood pressure and nose bleeds. He decided to become vegetarian and within a year his health problems started to disappear. Over the last eight years he has lost 130 pounds, cholesterol went down to 140, blood pressure is normal, and his energy has increased.

In April 1996, while on the Oprah Winfrey Show, he described how cows were being ground up and fed back to cows. Oprah then said “It has just stopped me cold from eating another burger.” Then in June a lawsuit was filed against Oprah and Harpo Productions for Food Disparagement. Thirteen states have food disparagement laws and in Colorado you can be sent to jail. Then in February 1998, the jury found Howard and Oprah not liable for damages.

In the first chapter, Mr. Lyman talks about the rendering process of cows, horses, cats, dogs, pigs, chicken, turkeys, sheep, and goats. Their fatty material is used for cosmetics, lubricants, soaps, candles, and waxes. The protein is dried and pulverized into a brown powder for pet food and livestock feed. In 1997, the FDA banned the policy of feeding cattle, sheep, or goats to cattle to lessen the chance of Mad Cow disease. Ranchers can still feed cattle chicken litter from chicken-raising operations. Nearly all of the meat in the United States is contaminated with carcinogens with eighty percent of pesticides used for livestock feed.

In chapter six, Mr. Lyman describes the use of Recombinant Bovine Growth Hormone or rBGH. Recombinant Bovine Growth Hormone is used to increase milk production. Milk production is increased by almost eighteen percent, but drains fat from the cow. By using rBGH only thirty-five percent of cows had calves and they had multiple births of twins and triplets. This is unusual since the chance of twins is one in ten thousand. rBGH causes the inflammation of the udders and increase the chance of pus in the milk. This forces farmers to uses more antibiotics. The FDA would not allow milk producers to label their products as being free of artificial hormones unless the label also stated “No significant difference has been shown.” The International Dairy Foods Association took the state of Vermont to court for mandating the labeling of dairy products from cows injected with rBGH. Monsanto sent threatening letters to retailers telling them that they would be violating federal law if they advertised that the milk they sold was rBGH free. Factory farm cows only live about four years before being sent to slaughter compared to family farms where they can live between six to twelve years.

In chapter seven, Mr. Lyman talks about the environmental cost of meat consumption. Almost eighty-five percent of United States agricultural land is used for the production of animal food and it takes sixteen pounds of grain to make one pound of beef. In North Carolina, there was a pfiesteria outbreak in local waterways from the waste of pig factory farms that killed millions of fish and sickened local fisherman. Pfiesteria causes body sores, acute losses of memory, strange bouts of temper, and seizures. The North Carolina government blamed low levels dissolved oxygen for the fish kill. Pfiesteria outbreaks have been found in the Delaware Bay to Gulf of Mexico.

Seventy percent of the eleven western states are used for raising food animals. Ten pounds of steak is equal to the water consumption of the average household for a year. The Ogallala Aquifer, the largest underground lake in the world, which reaches from Texas to South Dakota and Missouri to Colorado, will be exhausted in the next fifty years.

Grazing cattle has destroyed Ninety percent of the western range. In addition, they have destroyed eighty to ninety percent of plant life around bodies of water in Idaho, Colorado, Arizona, and New Mexico. Wyoming has lost eighty-three percent of its stream to grazing. These western states have also lost half of their topsoil over the last one hundred and forty years. The use of chemicals and cattle has destroyed six inches of topsoil. This has led to the loss of vegetation and wildlife, widespread flooding, soil erosion, water pollution, and cost U.S. taxpayers one billion dollars a year while only producing three percent of American beef. Cow pies return twenty-five percent of the nitrogen consumed by cattle while killing the grass underneath.

I have only covered a little bit of the information in this book. It was an easy read and is packed with information about farming, dairy industry, and cattle. I would highly recommend this book if you are trying to change your diet or are already vegan.

What is your favorite book?

From A to Vegan has an affiliate relationship with a person, company, product, or service mentioned in that message and may receive a commission on referrals or sales generated by that message.