Chris and Lydia already wrote nice posts about our trip to this year’s Summerfest (their posts are here and here) so there’s not a lot more for me to say, but I still wanted to talk a little bit about my own impressions.

I’m a skeptic by nature, and one thing that really impressed me, as Chris pointed out in her post, is that those people know their stuff. Whenever someone made some kind of claim, it was usually backed up by some kind of evidence: a study published in some recognized publication, footage from undercover investigators, medical evidence like angiograms and so on.

I came back from Summerfest very convinced that being vegan is really the only lifestyle that makes sense from the health, ecological, social and ethical points of view. Not that I had to be more convinced than I already was, but after being clobbered in the head by Science, all the major questions I had were put to rest.

I strongly recommend attending Summerfest if you ever have the chance. It will give you good, solid, science-based information that you can use for your own life and when talking about these subjects with others.

On a side note, the parking lot during the festival was a Priusfest… lots and lots of hybrid cars. And many cars had very interesting bumper stickers on them. Here’s a sampling, below (click to embiggen). 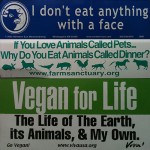