What better way to start off the New Year, but with the promise of Extraordinary Vegan* food? Chef Alan Roettinger’s cookbook promises just that and will help you get to the next level of vegan cooking.

The book includes recipes from breakfast to tantalizing desserts. The introduction is short and sweet listing extraordinary ingredients—herbs, spices, fats, seeds, flavorings and sweeteners—you should have in stock. Chef Alan then includes a chapter of fundamental recipes, most of which have a QRcode leading to videos of him preparing the dishes, so you can watch and learn. Most of the recipes seem simple enough to prepare, but with combinations of flavors that are bound to impress guests. The recipe below is a great example of how simple and stunning they are. 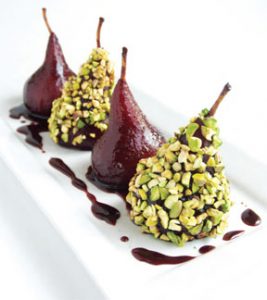 Directions:
Select a medium saucepan that will accommodate the pears snugly in an upright position, allowing space for the stems to fit with the lid in place.

Core the pears from the bottom to remove the seeds, leaving as much of the flesh
as possible. Peel the pears, leaving the stems attached. Trim the bottoms slightly,
so the pears can stand up straight. Put them in the saucepan and add the juice. It’s
normal for the pears to turn on their sides and float at first. If you have a large strainer,
set it over the pears gently to keep them submerged.

Break open the cardamom pods and remove the seeds. Crush the seeds to
a gritty powder in a mortar with a pestle or on a cutting board with the back of a
wooden spoon. Add the cardamom seeds and bay leaf to the saucepan. Bring to
a boil over high heat. Decrease the heat to medium and simmer until the pears are
tender, 20 to 45 minutes. To test the pears for tenderness, insert a paring knife into
the thickest part and lift. The pear should slip off easily. Using tongs, grasp the pears
by the stems and lift them out of the saucepan, allowing several seconds for the juice
to drain well. Set them on a plate.

Increase the heat to high and bring the juice to a boil. Boil until the juice is reduced
to about ¾ cup, 5 to 7 minutes. It should be a fairly dense syrup, thick enough to coat
a spoon. If any juice has accumulated around the pears, carefully tip the plate and let
it run back into the saucepan. Remove from the heat and let the syrup cool for about
10 minutes. Discard the bay leaf.

Using a large spoon, drizzle the syrup over the pears. Lift the pears with the tongs
and transfer them to dessert plates. Drizzle again with the syrup and serve at once.

Variation: Chop 1 cup raw or roasted pistachios into ¼-inch-thick bits. Put the pistachios
in a coarse strainer and shake to strain out any very fine, powdery bits. Put the
chopped pieces in a medium bowl. After drizzling the pears with syrup, roll them in
the pistachios until evenly coated. Carefully set the pears on dessert plates and pour
a little of the syrup around them. Serve at once.

From Extraordinary Vegan by Alan Roettinger. Used by permission from Book Publishing Company.

We’re giving one lucky reader a chance to win Alan Roettinger’s Extraordinary Vegan Cookbook. To enter for a chance to win, leave a comment below telling us why you think you’re an extraordinary vegan, or why you’d like to be one. US residents only, please.

I’ll randomly select one of the comments on Wednesday, January 8th at 8:00 pm EST.

Wow! Reading everyone’s comments has been amazing. So many of you making positive changes and inspiring others to do the same.

The lucky winner for this giveaway is…